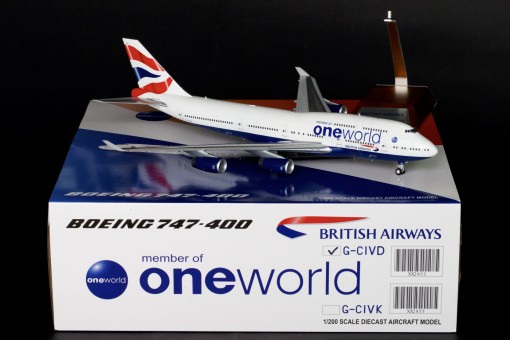 Details
Highly detailed JC Wings diecast model airplane Qantas Boeing B747-400 "One World" Item#: JC2BAW853 Registration: G-CIVD Scale: 1:200 British Airways, often shortened to BA, is the flag carrier airline of the United Kingdom and its largest airline based on fleet size, international flights and international destinations. When measured by passengers carried it is second-largest in Britain, behind easyJet. The airline is based in Waterside near its main hub at London Heathrow Airport. A British Airways Board was established by the United Kingdom government in 1972 to manage the two nationalised airline corporations, British Overseas Airways Corporation and British European Airways, and two smaller, regional airlines, Cambrian Airways, from Cardiff, and Northeast Airlines, from Newcastle upon Tyne. On 31 March 1974, all four companies were merged to form British Airways. After almost 13 years as a state company, British Airways was privatised in February 1987 as part of a wider privatisation plan by the Conservative government. The carrier soon expanded with the acquisition of British Caledonian in 1987, followed by Dan-Air in 1992 and British Midland International in 2012. British Airways is a founding member of the Oneworld airline alliance, along with American Airlines, Cathay Pacific, Qantas, and the now defunct Canadian Airlines. The alliance has since grown to become the third-largest, after SkyTeam and Star Alliance. British Airways merged with Iberia on 21 January 2011, formally creating the International Airlines Group (IAG), the world's third-largest airline group in terms of annual revenue and the second-largest in Europe. IAG is listed on the London Stock Exchange and in the FTSE 100 Index. A long-time Boeing customer, British Airways ordered 59 Airbus A320 family aircraft in August 1998. In 2007 it purchased 12 Airbus A380s and 24 Boeing 787 Dreamliners, marking the start of its long-haul fleet replacement. The centrepiece of the airline's long-haul fleet is the Boeing 777, with 58 in the fleet. British Airways is the largest operator of the Boeing 747-400 in the world, with 53 registered to the airline. The Boeing 747-400 is a major development and the best-selling model of the Boeing 747 family of jet airliners. While retaining the four-engine wide-body layout of its predecessors, the 747-400 embodies numerous technological and structural changes to produce a more efficient airframe. Its most distinguishing features versus preceding 747 models are 6-foot (1.8 m) winglets mounted on 6-foot (1.8 m) wing tip extensions, which are found on all 747-400s except for Japanese domestic market versions. The 747-400 is equipped with a two-crew glass cockpit, which dispenses with the need for a flight engineer, along with more fuel-efficient engines, an optional fuel tank in the horizontal stabilizer, and revised fuselage/wing fairings. The aircraft also features an all-new interior with upgraded in-flight entertainment architecture. As on the 747-300, passenger variants include a stretched upper deck as standard. The model has a maximum capacity of 660 passengers with the 747-400D variant,[4] and can fly non-stop for up to 7,670 nautical miles (14,200 km) with maximum payload, depending on model. Northwest Airlines first placed the 747-400 in commercial service in February 9, 1989. The 747-400 was produced in passenger (−400), freighter (−400F), combi (−400M), domestic (−400D), extended range passenger (−400ER) and extended range freighter (−400ERF) versions. The 747-400 is the second-most recent version of the Boeing 747 aircraft family, having been superseded by the more economical and advanced Boeing 747-8. The last −400 model was delivered in December 2009.
Additional Info
Warning: Choking Hazard! Contains small parts. Not a toy. Not for children under 3 years.