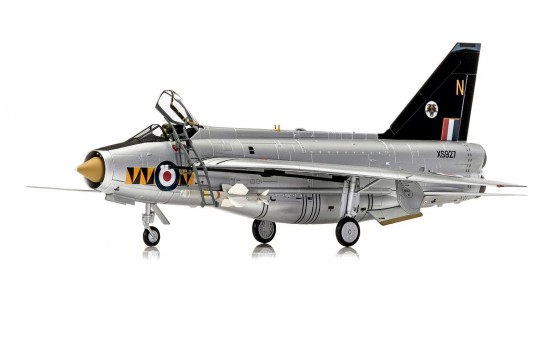 Details
RAF English Electric Lightning BAC ‘The Tigers’ Corgi Aviation CG28402 AA28402 F.6 XS927/N No.74 Squadron scale 1:48 Highly detailed Corgi Aviation prepainted diecast metal warbird Item#: AA28402, CG28402 28402 Scale 1:72 When the English Electric Lightning entered RAF service with No.74 Squadron at Coltishall in June 1960, Britain had its first true supersonic interceptor and one of the most potent fighting aeroplanes the world had ever seen. Charged with protecting Britain from aerial attack, everything about a Lightning mission involved speed, with pilots using the blistering climb performance of the aircraft to mount a ‘Supersonic dash’ to the target, returning to base, refuelling and rearming before repeating the process if the situation dictated. The ultimate incarnation of the country’s first and only all British supersonic fighter aircraft was the F.6 variant, which addressed many of the issues associated with earlier Lightnings, whilst retaining the stellar performance of this magnificent aircraft. Lightning F.6 XS927 made its maiden flight from the English Electric factory on 15th February 1967, in the hands of celebrated test pilot Roland Beamont, before joining No.74 Squadron at Coltishall in early April the same year – this was the last F.6 to join the Squadron before they moved to RAF Tengah in Singapore. Wearing the iconic colours of this famous squadron, it is no wonder the Lightning served to inspire a great many people to join the Royal Air Force and for many, is still an enduring symbol of when the British aviation industry was at the peak of its manufacturing prowess. As one of the most famous squadrons of the Royal Air Force, No.74 ‘Tiger’ Squadron can trace its history back to 1st July 1917 and has been associated with such classic fighting aircraft as the SE5a, Hawker Hurricane and Gloster Meteor since that date. For many enthusiasts though, its most poignant association has been with the mighty English Electric Lightning, an aviation icon of the Cold War Period and one of the most significant achievements of the British aviation industry. As the Squadron selected to welcome the Lightning into frontline service in the summer of 1960, the ‘Tigers’ went on to operate the F.3 variant, T.4 and T.5 trainers, along with the ultimate F.6 fighter version of the Lightning. Indeed, No.74 Squadron was again to be the first unit equipped with the definitive F.6 version of the aircraft, which was capable of being fitted with over-wing tanks to extend the operating range of this potent fighter and resulted in the Squadron being assigned to the RAF Far East Air Force, based at Tengah in Singapore. In June 1967, the Lightnings of No.74 Squadron began leaving Leuchars for their ferry flight to the Far East, with their arrival at RAF Tengah several days later relying on the support of no fewer than seventeen Victor tankers, which provided the aircraft with an essential air to air refuelling platform during their flight. After enforcing the effective air defence of the region for just over four years, the Lightnings of No.74 Squadron were flown to RAF Akrotiri in Cyprus, where they were handed over to the care of No.56 Squadron, prior to 74 Squadron being disbanded and bringing their proud association with Britain’s only indigenous supersonic fighter to an end.
Additional Info
Warning: Choking Hazard! Contains small parts. Not a toy. Not for children under 3 years. 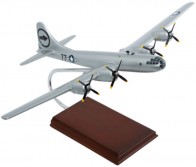