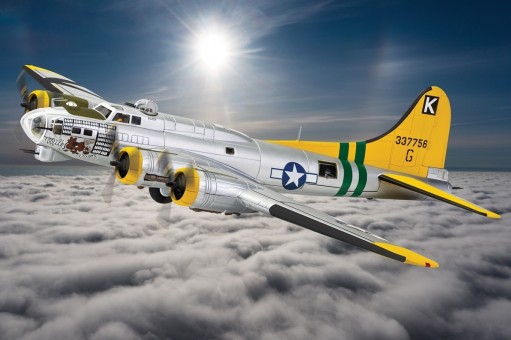 oeing B-17G-70-BO serial number 43-37756 was built at Boeing's Seattle factory in the early spring of 1944 and delivered to the USAAF at Dow Field, Maine on 18th May the same year. She was assigned to the 708th Bomb Squadron, 447th Bomb Group and later flown to Rattlesden, Suffolk, England, where she would join the rest of her unit already engaged in combat.

Flying her first combat mission on 20th June 1944, she would be in the air again the following day, this time on a raid to the Big One - Berlin, in the hands of a different crew. This crew had recently transferred to Rattlesden from the 15th Air Force, flying bombing missions from bases in Italy. As this was quite unusual for base personnel, on landing back following the Berlin mission, they were asked by members of the ground crew how did it compare to flying missions from the opposite side of Europe and they replied, 'It was like a 'Milk Run', obviously a little tongue in cheek, as this was a colloquialism for a mission which was without incident and one which incurred no casualties.This off the cuff remark would stay with this particular Flying Fortress from that point onwards and 43-37756 would later benefit from the addition of some impressive and rather unique artwork. She would be adorned with a friendly looking cartoon cow and the words Milk and Wagon painted either side of it. For every successful mission flown, a new milk bottle would be added to the scoreboard on the portside nose of the bomber, with the white bottles painted over a black background, so they could be more easily seen. If the addition of this nose artwork was intended to bring the crew luck, then this was a shrewd move, as 'Milk Wagon' was definitely seen as being a lucky ship. She would eventually set a record for a Fortress in the 447th Bomb Group, as she racked up no fewer than 129 missions without suffering a single abort due to mechanical issues, testament not only to the strength of the B-17, but also the ground crews who kept her in the air.

Following the end of hostilities, Milk Wagon was flown back to the US and despite her impressive war record and distinctive nose artwork, was sent to Kingman Storage Depot 41 in the Arizona desert for scrapping, a fate which awaited so many former wartime military aircraft.
Additional Info
Warning: Choking Hazard! Contains small parts. Not a toy. Not for children under 3 years.